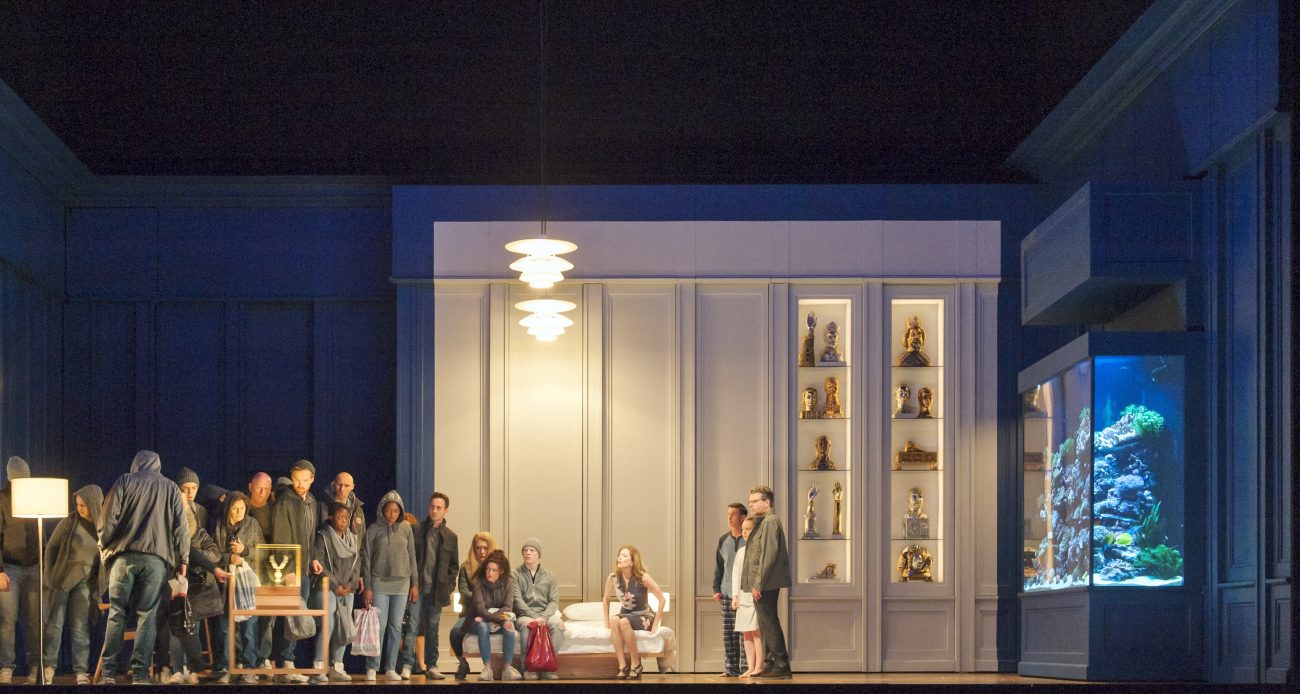 We were contacted by the Royal Opera House to produce two realistic marine aquariums, that could be toured, for the set of their newly commissioned opera Lessons in Love and Violence; a story of riches to rags about a king who allows his personal relationships to come between him and the court. His decisions tear a country and a family apart in this powerful and thrilling story of passion and brutality.

The Royal Opera House wanted to use the aquariums to help visualise this journey. We knew that one of the biggest hurdles was going to be the large dimensions as they came in at a huge height of 2302mm, a width at 1940mm and a depth of 768mm. Prior to asking ArtAV for a solution they had looked at using real aquariums but the quantity of water, for even one aquarium of that size would be too heavy for the stage.

Our solution was to use a custom designed and built LED video wall manufactured in the shape of an aquarium and create our own content by commissioning and filming a real life aquarium exactly half the size but still to scale. Getting the LED aquariums manufactured felt like the easy part, finding an already established marine aquarium with the same dimensions or to scale was the challenge. We contacted every public aquarium and aquatics store in the UK and not a single establishment had anything close to what we required. We decided that the best way to get what we wanted was to work with an aquatics company and create our own custom aquarium.

We contacted Simply Aquatics, a marine specialist aquatics company, based in the north east of England, to work with us on this project. Using their specialist supplier they had a custom aquarium built to exactly half the size of the required dimensions. They then filled it with stunning purple reef rock and salt water. At this stage, with no marine life, we had to do our first film shoot that would be edited post production to add algae and effects to represent a lifeless, run down and neglected aquarium used towards the end of the production. The cameras were set up at the same angle that the aquarium would be viewed by the majority of the audience, which would allow them to see the refraction as you would viewing the real aquarium.

Once the first shoot was done, Simply Aquatics were left to stock the aquarium with beautiful marine life including colourful Corals, Royal Tangs, Flame Angelfish, Clownfish, and many more. This resulted in a 1.5m tall, beautiful aquascape saturated in colour.

After the marine life had settled into their new habitat it was time for the final shoot. This was a slightly bigger shoot that required 3 different angles to be shot concurrently for forty minutes as the front and both sides of the aquarium needed to be synchronized. For Both shoots, to prevent reflections on the glass, we used our pipe and drape support system surrounding the full aquarium in a black box, we were armed with two Sony NX70s and our Blackmagic URSA Mini Pro and Cinema 4k Cameras. We used one of our Hyperdeck mini studios as our main recorder with two Blackmagic Focus Assists and a Blackmagic 4K video assist as preview monitors and backup recorders. The content was then edited and put together in our Davinci post production suite ready to be scaled on to our aquarium shaped video walls.

The LED walls were delivered from the manufacturer in their component parts. They were built and tested in our warehouse, put in their flight cases, ready to tour, and were then shipped to The Royal Opera House, in London. As this production is touring different venues, we also provided in house training for their technicians that covered how to use the LED wall and also basic repairs.

The show premiered in May and had a brilliant response from the audience and some fantastic reviews and some even mentioned the amazing aquarium on set. 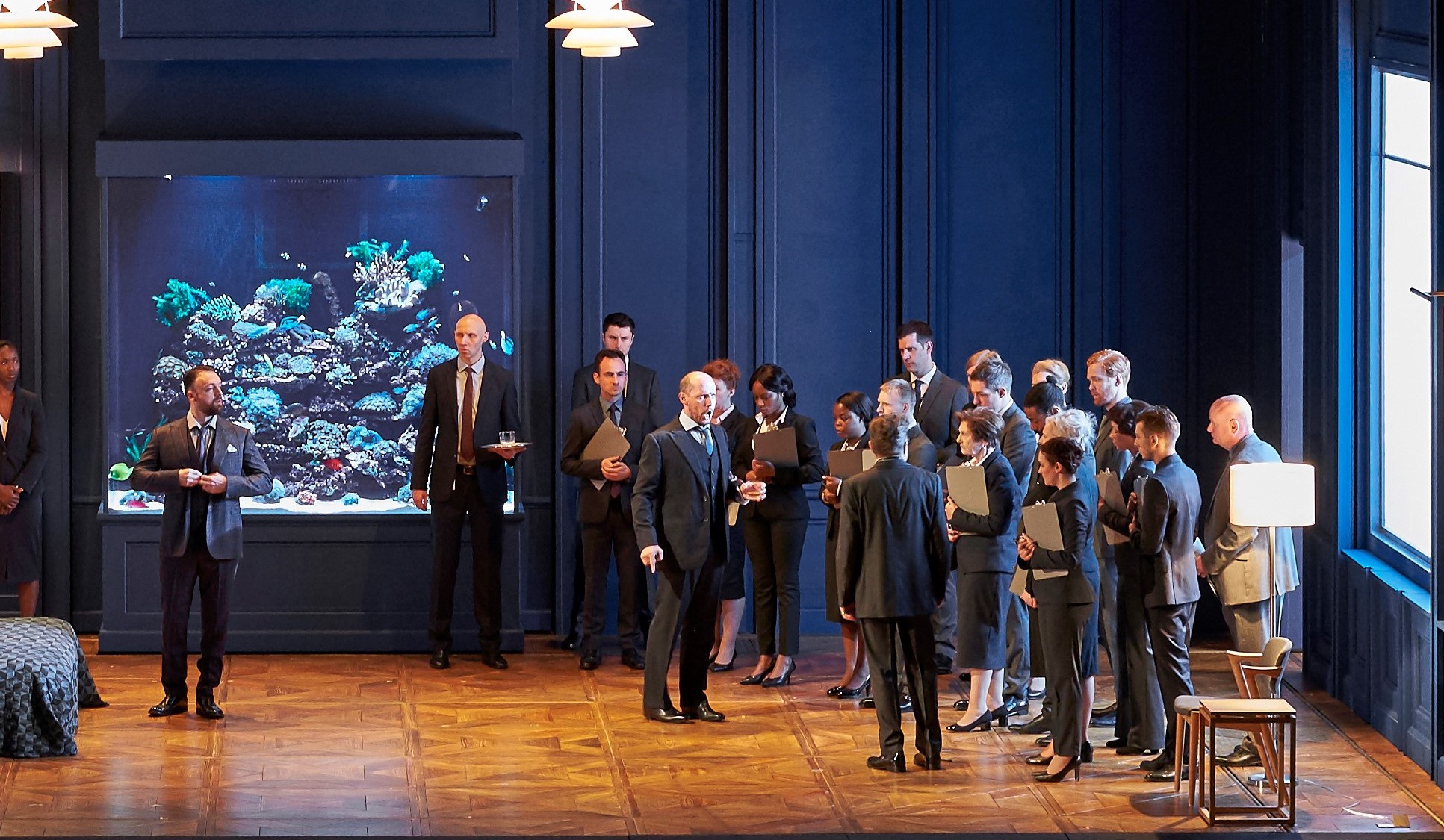 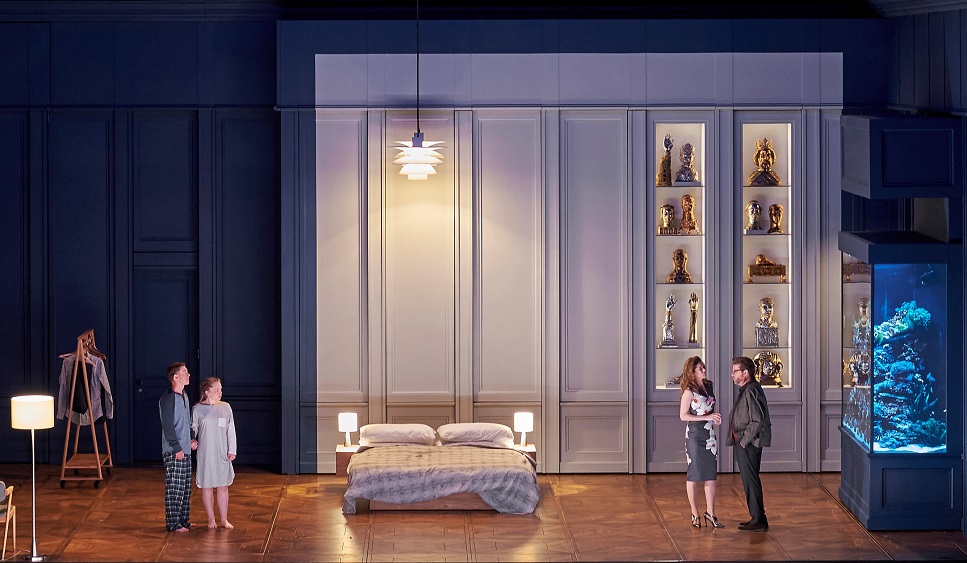