ArtAV were approached by Aura Satz to design and build a scrolling screen made from five specially commissioned pianola rolls from Antheil’s ‘Ballet Mecanique’. This was to be shown at the Hayward Gallery in London.

Initially in the R & D stage five individual rolls were fixed side by side onto a clear membrane, but for the final install the rolls were transferred onto one large roll of custom water cut material consisting of over  33,000 individual cuts! 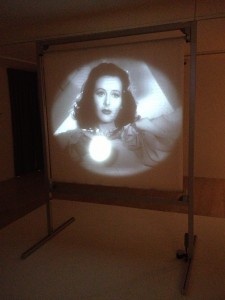 The screen is in constant motion so that the film creates a complex light play from the encoded musical score, as the perforated strips of paper interact and produce patterns on the surrounding walls. In addition, a light located behind the screen – a kind of imageless echo of the projection lamp – flashes in systematic intervals, flattening the film-screen and highlighting the materiality of the pianola paper.