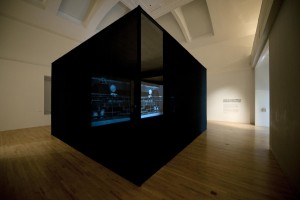 Unfolding the Aryan Papers is as much about a film that never happened as it is a portrait of the chosen lead actress Johanna ter Steege. It begins with images of Johanna taken in 1993 by Stanley Kubrick – they are of the wardrobe shoot for the film Aryan Papers. Johanna was to play the lead role of Tania, a compelling character. Tania is central to the film: she is a Polish Jew trying to save herself and her family from the Nazis.

The work takes its title from Kubrick’s film and, intercut between stills of Johanna, are images from the archive of specific scenes Kubrick wanted to recreate and images from the Ealing Studios Archive of interiors, shot in 1939/40. The film moves into live action with footage of Johanna filmed now, fifteen years later, where she appears to come to life, recreating stills from the original wardrobe shoot. 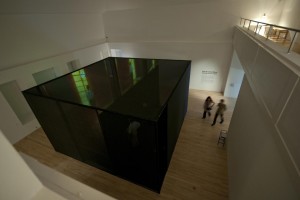 Filmed on 16mm and transferred to HDCam. Live action footage edited with stills scanned from The Stanley Kubrick Archives.

ArtAV worked with Jane & Louise from the conceptualisation stage right through to installation. The work is played from a Mac mini running ArtAV’s PlayM software through Barco Projectors, a custom bounce mirror rig and sound from Anthony Gallo. One of the unique aspects of the work is an ‘infinity loop’ created by opposing foil mirrors inside the structure that make the work appear tens of times bigger than it actually is – defying the space constraints of the cube itself. 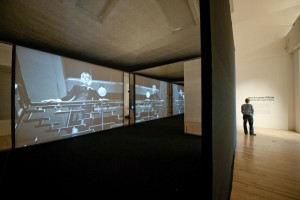